In his multimedia presentation entitled “Tunisia: emerging democracy, confirmed tourist destination”, Mr Abdellatif Hmam will speak about the tourism industry in Tunisia in the context of political, economic, social and cultural changes related to the political regime revolution in Tunisia.

He will also present the strategic investments in tourism made in Tunisia which have been associated to the transparent and democratic rule. The speech will be followed by the distribution of brochures, leaflets and maps of Tunisia. Also, the participants will have a possibility to taste Tunisian sweets and spices.

Abdellatif Hmam, General Director of Tunisian National Tourism Office, since march 2015. In previous years, he was a member of many ministerial cabinets (Industry and Commerce, Economy and Finance, Environment) and a member of the cabinet of the Prime Minister of Tunisia in 2000-2009. From 2019 to 2015, he held a position of the President of the Center of Export Promotion. He has a wide knowledge and experience with international organizations such as OECD, PNUD or World Economics Forum, as he cooperated with them on projects implemented in Tunisia. During his work, he visited more than 130 countries, where he represented Tunisia at numerous international and regional forums, conferences and summits such as World & Economic Forum in Davos , MENA Economic Conference in Amman and in Cairo, Sommet Mondial de la Société de l’Information in Tunis, Forum Mondial sur la gouvernance in Vienna, Forum Mondial « Reinventer le Gouvernement» in Seul, Tokyo International Conference on Africain Development. Mr Hmam has also college lecturer experience. He gives lectures at Tunisian Administration School in the field of results oriented managing, on economic diplomacy in Diplomacy Institute of Tunis and on international negotiations techniques for the students of The Institute for Finances and Development in Tunis. 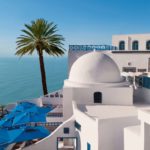